Liquefaction is the process where, during earthquake shaking, sand and silt grains in wet soil are rearranged and the water in the spaces between the grains is squeezed.

Pressure builds up until the silt and sand grains float in the water, and the soil behaves more like a liquid than a solid. The pressurised water is forced up to the ground surface through the easiest path it can find - often through cracks and crevasses in the ground or concrete.

The water takes silt and sand with it, forming sand boils or volcanos. The ground surface above liquefied soil often tilts and sinks. Buildings, roads, pipes and tanks on or in liquefied soil can be damaged by the tilting or sinking of the ground. 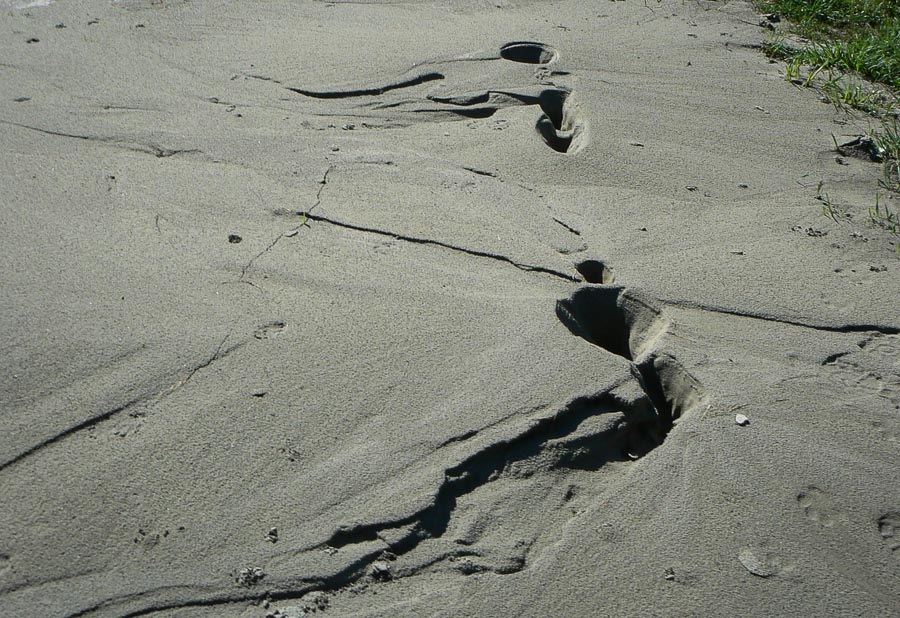 To liquefy, the soil must be:

Liquefaction usually only happens in susceptible soils in moderate to strong ground shaking.

During an earthquake, liquefied soils can sometimes move sideways, usually towards streams or rivers, but also if the surrounding land is lower than the liquefied land. This is called lateral spreading. Lateral spreading can cause cracking of the ground surface as the soil underneath it moves sideways.

How we map liquefaction susceptibility
We have commissioned many liquefaction reports and maps for Canterbury since 2000. The reports can be further explored on the earthquake hazard reports page and outline broad zones where liquefaction is more or less likely to occur.

None of the reports give the likelihood of liquefaction for a particular site or land parcel. This is because soil types can change a lot over very short distances - even from one neighbouring property to another..

Liquefaction information for Greater Christchurch (including parts of Selwyn, Waimakariri and Hurunui districts)

The project area extends from Southbridge to Amberley, and is based on the area of the Greater Christchurch Urban Development Strategy. This is the area where development is most likely over the next 35 years.

The project area also incorporates the south-eastern part of Hurunui district, because this area has similar soils to coastal Waimakariri district. Rather than concentrating on zoning land for rebuilding, this project focuses on future development, so it covers only land outside the Ministry of Business, Innovation and Employment Technical Category areas.

The report includes maps of where liquefaction occurred during the September 2010 Darfield (Canterbury) earthquake and the February 2011 Christchurch earthquake.

You can read the full report here and see where the liquefaction zones are on our interactive map on Canterbury Maps.

Liquefaction information for other areas in Canterbury
Most soils outside the greater Christchurch area are not susceptible to liquefaction.
Liquefaction susceptibility maps have been produced for each district in Canterbury as part of earthquake hazard assessments for infrastructure (Kaikoura, Waimakariri, Selwyn, Ashburton, Mackenzie, Waimate and Waitaki) or as specific reports (Hurunui and Timaru).

These maps show general areas of different liquefaction susceptibility, based mainly on underlying geology, but within these areas there can still be some variation in the type of soil. They do not show where liquefaction will or will not happen in a strong earthquake, only areas of more or less susceptibility.

The liquefaction susceptibility at a particular site can only be determined through a geotechnical assessment at that site.

You can see where the liquefaction susceptibility zones are on our interactive map on Canterbury Maps.

Note that the eastern parts of the Waimakariri, Selwyn and Hurunui district maps have been superseded by the 2012 Review of liquefaction hazard information in eastern Canterbury, including Christchurch City, and parts of Selwyn, Waimakariri and Hurunui Districts.