Visiting farms in the Mt Somers area, it is clear those who own the farms are passionate about protecting the land from degradation and enhancing it for future generations.

Landowners in the area have been undertaking planting and fencing projects for decades with several landowners putting QE11 covenants on parts of their land to ensure its protection in the future.

David and Rosemary Morrow are one example of this. The couple has been planting and fencing off springs and creating wetlands on their property for the past 20 years.

“We’ve always believed in fencing off springs which are important sources of water for the farm and permanent waterways,” David said.

The couple initially fenced and planted around three springs which have created beautiful wetlands on their property, and over the past year have turned their attention to a fourth, known as Okawa Wetland.

“We got a lot of satisfaction in doing that. So in my retirement we decided we had a genuine wetland and that had some carex secta in it so we’ve fenced that off two years ago and just finished planting it last year,” David said.

They were granted about $12,000 from the Ashburton Water Zone Committee’s Immediate Steps fund for the project.

“I hope the wetlands will last forever and people will enjoy them forever. We enjoy looking at them and hope others will in the future,” Rosemary said. 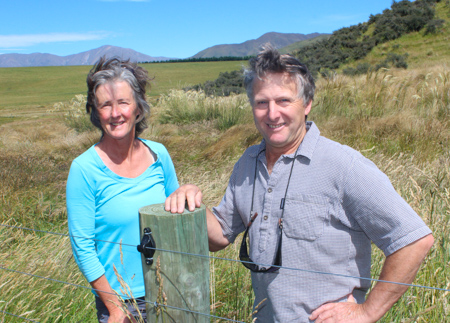 Meanwhile, their neighbours Charles and Elspeth Jaine have also undertaken fencing projects on their property. They have put four QE11 covenants on wetland areas within their farm to ensure its protection, and recently received $5000 from the Ashburton Water Zone Committee’s Immediate Steps fund to assist in fencing 3ha of wetland around Limestone Creek.

“We could see it diminishing due to regular grazing, so that’s why we thought it was important to do something about it,” Charles said of the decision to fence off Limestone Creek.

“The fact there were bits here that were natural- and the way they had always been- we knew they were special, and special enough to look after well,” Elspeth said.

Already, they can see some positive changes in the Limestone Creek wetlands as a result of the fencing with toi tois and carex secta starting to come up, but the couple acknowledge it’ll be a few years before the wetland is flourishing again.

Environment Canterbury land management and biodiversity officer Sarah Heddell said the work of numerous landowners to enhance and protect Limestone Creek and Gawler Stream was pretty special. “This is a very special foothills areas and these projects are interlinking along one stream and creek to create a continual area of native planting along the stream which will attract animals, birds and insects. These projects also enhance the water quality in the stream,” she said.

The Ashburton Water Zone Committee was formed in 2011 as part of the Canterbury Water Management Strategy to work collaboratively with the community to find solutions to local water issues. The zone committee is made up of six community members, two rūnanga representatives and a representative from the Ashburton District Council and Environment Canterbury.

For more information including stories and events in the Ashburton Water Zone Committee, click here.

The Ashburton Water Zone Committee has funding available to help landowners protect, restore and enhance the environmental values of their properties.

For more information on the Immediate Steps project, contact Environment Canterbury on 0800 324 636 and ask to speak to a biodiversity advisor from your zone.

The Ashburton water zone is bordered by two large braided rivers — the Rakaia and Rangitata, which have their headwaters...