Feral rabbits are listed as a pest in Canterbury’s Regional Pest Management Plan 2017-2038.

Why does it matter?

In areas of high and extremely rabbit-prone land, population increase is not curbed by natural mechanisms and can quickly build to high levels. These areas occur largely in the Upper Waitaki Valley, Mackenzie Basin and the inland Kaikōura area.

Rabbits can cause a number of adverse effects. At high numbers, the control costs can be prohibitively expensive. Their impact reduces available grazing for domestic stock and subsequently decreases the financial returns to landowners and their ability to fund control.

Canterbury land occupiers are responsible for feral rabbit control on their land, and it is important to the Canterbury community that neighbours are not negatively impacted by another’s inaction for rabbit control. Feral rabbit populations must be kept at level 3 or lower on the Modified McLean Scale.

These transects were established between 1990 and 1993 and form the most comprehensive rabbit monitoring data set within New Zealand.

Mackenzie and Omarama recorded strong rabbit increases in the past two years, despite the release of the new RHDv1 K5 virus at more than 70 locations in these districts. The new virus failed to take hold in rabbit populations and did not cause widespread disease epidemics.

What’s happening in the Mackenzie?

Historically, the Mackenzie basin contains the most rabbit-prone soil in Canterbury. Here, the challenge of reducing rabbit numbers is far greater than elsewhere, as shown in the graph above, particularly in the Tekapo and Eastern Mackenzie subareas. 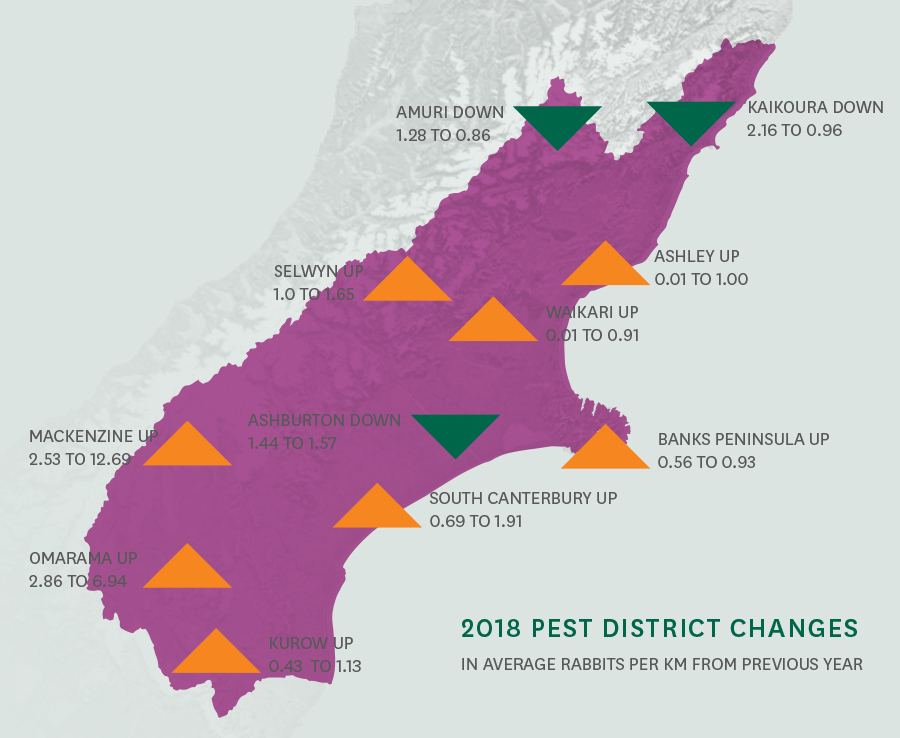 Find out more about our feral rabbit management programme.

Read about the work being done to manage other animal pests in Canterbury.

Find out how ratepayer funding supports this work with our Rates Tool.