When Barb and Greg Morriss first embarked on an ambitious project to restore a 250-metre stream running off Saltwater Creek, the area resembled “an overgrown jungle”.

The duo, who milk 400 cows on a 250-hectare block, had noticed their stream was flooding surrounding land more often and decided to allow the area to revert to its original form as a wetland. Barb said this move made sense from both an environmental and operational point of view.

“It was the right thing to do. The stream is tidal, so it flooded at high tide and was full of sediment. There wasn’t anything living in the water. The area surrounding the stream was a jungle of macrocarpa, willows and pines. It was the best thing for the animals and the environment.

“I knew it would be a huge job, but I also knew that we had to do it.”

In 2017, they received $10,000 of Immediate Steps funding from the Waimakariri Water Zone Committee for planting. Barb said this initial funding kick-started the project which has grown into a collaborative effort from there. 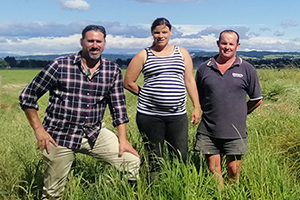 The pair say they have had really good project support from Environment Canterbury, Synlait and Ballance.

“It’s a huge job to remove all the existing trees and then do the planting so having people come out to help us has been fantastic, especially for the planting days when they also bring a barbecue. It’s a good opportunity to learn from each other and we get a lot of planting done too.”

Moving the fence back to increase the stream setback from a couple of metres to 15 metres has allowed 2,500 native plants to flourish. Greg’s father-in-law Donald said he's noticed plants self-seeding since removing stock from the site.

“What was originally growing out there has come back to thrive in the place nature intended for it. I don’t believe in a one-size-fits-all approach when it comes to which plants should go where, but I have been fencing off wet spots around the farm since the 1970s when I first took over the farm. My philosophy is that nature knows what’s best,” he said.

Our Poū Matai Kō (mahinga kai facilitator) Makarini Rupene visited the restoration project to discuss cultural values and was delighted that tuna (eels) and inanga (whitebait) have been spotted in the stream.

“When you see these species returning it shows a real improvement in the ecosystem and that impacts the bigger picture. Everything from flora and fauna through to the land and the waterways are all connected.

“A big part of my role is encouraging farmers to lead the way forward as mahinga kai is all around us and it’s part of a bigger story that can bring us together to create positive changes for our environment.”

With the enhancement of mahinga kai now a requirement when implementing Farm Environment Plans (FEPs) in Canterbury, Makarini said cultivating an understanding of cultural values through a protection project such as the Morriss' wetland helps create a sustainable eco-system.

“I’d love to be able to bring a group of farmers out here for a shed talk to see what’s been done. If you do it step by step it’s manageable and you’re creating something better for the next generation.

“What they have done so far is awesome and I really admire their can-do attitude. Once you start down this path you find everything falls into place and while it’s a huge effort, the benefits are just fantastic, especially when thinking about future generations.”

Barb agrees and said that while the project has required a lot of hard graft, she has learned a lot about cultural values and sustainability.

“We’ve had lots of challenges to overcome and it’s been a long process but it’s definitely worth it and I’d encourage anyone considering a similar project to give it a go because you learn so much along the way.”

To find out more about mahinga kai, head along to the upcoming Shed Talk in Waimakariri on March 20.

Life has turned full circle for our Poū Matai Kō (mahinga kai facilitator) Makarini Rupene, as he moves his focus...

Mahinga kai is about the value of natural resources that sustain life, including the life of people.