Scheduled maintenance
We will be performing maintenance from 5pm Friday 5th June to 12 noon Saturday 6th June. Documents may not be available to view or download during this time. We apologise for any inconvenience.
COVID-19: Environment Canterbury offices return to normal from 2 June
From Tuesday 2 June our Tuam Street and Timaru offices will return to normal opening hours of Monday-Friday, 8am-5pm (Christchurch) and 8.30am-5.00pm (Timaru). Several restrictions will remain in place, including physical distancing and all visitors required to sign in and out. Please note that many of our staff are still working remotely, so we prefer – where possible – that you contact us on 0800 324 636 (8am-5pm) or via our contact us page. For information about visiting the Bus Interchange, or any public transport queries, go to metroinfo.co.nz.

Planting to enhance native vegetation beside the Waimakariri River is creating a “corridor” for native birds and improving biodiversity.

The Waimakariri Corridor Project began five years ago and spans the Waimakariri, Christchurch West Melton and Selwyn Te Waihora zones. It includes nine restoration projects within the Waimakariri zone alone and is already contributing to the food chain in the river system.

About the Waimakariri Corridor project

In 2018, the Waimakariri Zone Committee contributed $16,000 to two of these projects.

As the thousands of shrubs and trees planted by Environment Canterbury staff, contractors and volunteers grow, there are encouraging signs that the plants are becoming self-sustaining and insect and bird numbers are growing. 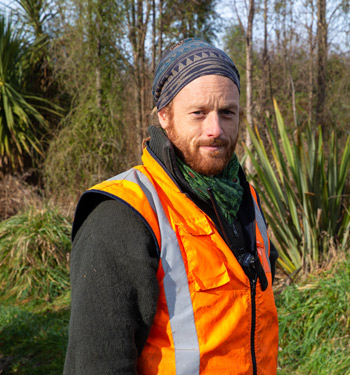 Park Ranger Greg Stanley said that along with signs that insect populations are increasing, there are more birds about.

“If you really look around, you’ll see two-and-half-year-old native shrubs with five to 10 cocoons attached to them, and you don’t see many cocoons on the willows and poplars growing here.

“The increase in habitat is already being used; we have flax flowers that are attracting populations of bellbirds.”

Other bird species thriving are silvereye, quail and swamp harrier.

Most of the willows, poplars and other exotic species growing between the river and the flood protection stopbanks have been left in place and the new plantings are placed strategically in light-wells on the sheltered side of the existing vegetation, protected from harsh summer sun and damaging nor’westers.

“We get a 95 to 99 per cent success rate if we plant in these places because the stress is so low and the growth of the competitive grass species is so much less. We know we’re going to get so much more bang for our buck there, so we capitalise on that,” Greg Stanley said.

The species being planted are those that would occur naturally in Canterbury lowland riparian forest including kahikatea, matai, hinau, manuka, kanuka, lemonwood and griselinia.

As well as providing food and habitat for land-based birds, the native plant species have an effect on life in the river with the detritus that finds its way into the water providing food for bugs, which in turn are food for fish species and birds such as the endangered wrybill.

Greg Stanley says an Auckland University study of invertebrates in Waikato supported by manuka compared with those supported by crack willow showed manuka supported seven times as many invertebrates as willow, a pattern likely to be very similar in Canterbury.

“To know that if you establish a population of manuka on your banks, even just looking at the benefit to the invertebrate population, you’re going to have a seven-fold effect is a very valuable piece of information.”

Creating a wildlife corridor from the mountains to the sea

Part of the strategy is to provide a wildlife corridor from the mountains to the sea, with plantings no more than 2.5 kilometres apart, close enough for birds to fly easily between, hopefully bringing seeds with them in fruit and berries they’ve eaten, to be deposited in droppings, naturally planting more native species.

“If we can get a consistent network of sites spaced at about two-and-a-half kilometres, then we can cross our fingers that that will increase the use by native bird populations, where they can stop, rest, feed and continue.”

An essential part of the work is follow-up spraying of competing weed species, along with trapping of introduced predators which is mostly done by volunteers.

“I don’t have the time to put in the effort into a lot of trapping - but others do, and as soon as I get anyone with an interest in trapping on a volunteer basis, that’s definitely something we will happily use.”

As well as seeing more birds, Greg Stanley has observed increasing numbers of native seedlings popping up, growing naturally from seeds falling from shrubs and spread by birds, a sign that the project is succeeding.

“We need to get to a place where the plants are recruiting seedlings, supporting populations of invertebrates and birds and where plants are growing and shedding energy into the fresh water system.”