Scheduled maintenance
We will be performing maintenance from 5pm Friday 5th June to 12 noon Saturday 6th June. Documents may not be available to view or download during this time. We apologise for any inconvenience.
COVID-19: Environment Canterbury offices return to normal from 2 June
From Tuesday 2 June our Tuam Street and Timaru offices will return to normal opening hours of Monday-Friday, 8am-5pm (Christchurch) and 8.30am-5.00pm (Timaru). Several restrictions will remain in place, including physical distancing and all visitors required to sign in and out. Please note that many of our staff are still working remotely, so we prefer – where possible – that you contact us on 0800 324 636 (8am-5pm) or via our contact us page. For information about visiting the Bus Interchange, or any public transport queries, go to metroinfo.co.nz.

Environment Canterbury is making good progress on repairing flood-related erosion on the Opihi River, near Waipopo.

The majority of the river has now been diverted away from the erosion site, on the northern bank of the Opihi River between Wareing and Omara Road, and it is nearly ready for the next stage of work.

While repairs ceased for the first two days of the fishing season (Sunday 1 October and Monday 2 October) work will need to recommence on Tuesday 3 October while conditions are good.

This next work stage, which involves backfilling with gravel and anchoring trees for flood protection, will take approximately two weeks, depending on river conditions.

Erosion and slumping threatens the northern bank the of Opihi River

The work is required because a 100m length of erosion and slumping (saturation of soil causing the bank to weaken and resulting in large clumps of material slipping into the water) has occurred in the northern bank of the Opihi River.

The stopbank that keeps floodwater from spilling out onto the farmland and running down to the Milford Huts is being threatened.

The erosion has been contributed to by a deep channel of the river flowing along the base of the bank, creating pressure and weakening it. In addition, high river flows have washed away the thin line of tree protection, which has added additional pressure to already saturated soils, causing erosion.

Work is underway to create a diversion channel

Work is already underway to create a diversion channel, directing the water away from the bank to relieve pressure.  This work began on Tuesday 19 September, and is expected to be completed before the end of September.

The diversion work will be dependent on river conditions and flow. With the recent rainfall in the catchment, the Opihi River is discoloured and has higher flows than normal which will take several days to settle down.

Once the diversion channel is finished, it will be decided when the best time is to complete the erosion and slumping repair work, involving shifting gravel to backfill and repair the bank.

The purpose of the diversion channel is to enable the repair work to occur out of flowing water and minimise sediment discharge, however it is acknowledged that to complete this repair, some sediment disturbance and associated discharge will occur.

Further work will be needed to reinstate stopbank protection

Further works to reinstate protection will also need to be carried out.  The extent and timing of this will be decided once the initial diversion has been completed.

Access to the river will be restricted until the end of September at this stage, when there will be a further update on when the remaining work will occur.

This is a popular area for whitebaiting and fishing, so our river engineering team is working with community groups including Fish & Game, local Rūnanga, DOC and the adjacent landowner, to ensure they are aware of the work being undertaken. 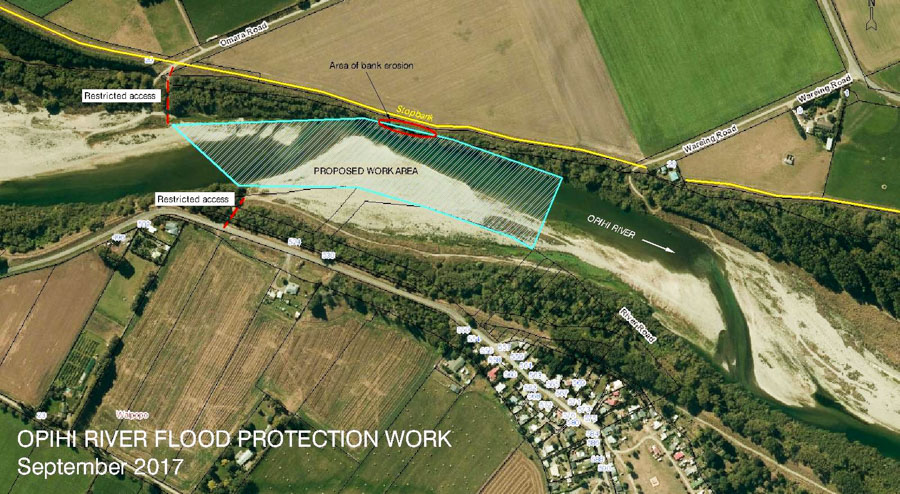