COVID-19: Alert Level 2 - Environment Canterbury offices are open
At Alert Level 2, our Tuam Street and Timaru offices will be open to the public as normal, Monday-Friday, 8am-5pm (Christchurch) and 8.30am-5.00pm (Timaru). However, we prefer – where possible – that you contact us on 0800 324 636 (8am-5pm) or via our contact us page. For those who need to visit our offices, restrictions will be in place, including physical distancing, all visitors required to sign in and out, and encouraging visitors to register using the COVID-19 tracing app. We also encourage everyone to wear a mask, in line with government guidance. For information about visiting the Bus Interchange, or any public transport queries, go to metroinfo.co.nz

With the number of nationally-endangered native black-fronted terns dwindling, the tiny birds have been handed an advantage in the ongoing battle against braided river predators on the Clarence River | Waiau Toa. 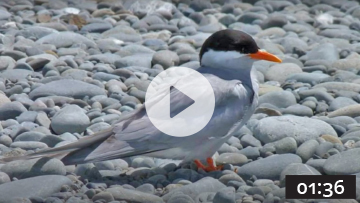 In April 2020 aerial weed control took place, after surveys of nesting islands indicated weeds were growing back - reducing the viability of nesting sites. These are monitored as part of a black-fronted tern restoration project between Environment Canterbury and the Department of Conservation.

In an effort to curb the predator population, traps have also been laid every 100m or so along the banks of the river to increase the nesting success of the terns.

Since this story was first published in March, we've also put together a new video about how tern fledgling survival rates have dramatically risen in Kaikōura.

Threats to the terns

The Clarence riverbed has been degraded throughout its catchment by mammalian predators and weeds which threaten the braided river habitat.

In the breeding season, terns pick braided river islands free of woody vegetation to nest, which the likes of broom and gorse can rapidly colonise. This reduces available nesting habitats and forces terns into less desirable locations where they are more vulnerable to predators and flooding.

Hedgehogs, stoats, weasels, cats, rats, mice, possums and the Southern Black-backed Gull | Karoro have all been targeted with the trapping strategy due to their hunger for eggs, chicks and occasionally adult birds.

Karoro are significant predators of birds that depend on braided rivers for breeding grounds and food, such as the black-fronted tern. The terns are endemic to New Zealand and currently have the ‘threatened – nationally endangered’ conservation status.

In 2016, the Kaikōura Water Zone Committee committed $250,000 of Immediate Steps biodiversity funding over a period of five years to protecting indigenous biodiversity in the Clarence | Waiau Toa catchment through ongoing weed control and pest management.

Our Kaikōura land management and biodiversity officer, Heath Melville, said it is important to be providing the native terns a hand up.

"We've seen huge benefits to trapping and habitat enhancement over the course of the study.

"Above average river flows in October created many natural islands and cleared vegetation to the benefit of the birds. But unfortunately, high flows followed, leading to islands being flooded and only 14 chicks fledging this season compared to 142 chicks the season before," Heath said.

The Clarence/Waiau Toa is Canterbury's longest river, running for 209km through its large, rugged catchment. Management is shared between us and Marlborough District Council.

Improving the Clarence/Waiau-toa River ecosystem by controlling weeds is a major focus of the committee's Kaikōura Zone Implementation Programme.

The zone committee has long supported an integrated weed management strategy for long-term control in the catchment.

For more information on what's happening in the area, head to our Kaikōura water zone page.