A nationwide plan to tackle more than 800,000 hectares infested with wilding pines over the next year will generate 171 new jobs and investment of over $17 million in Canterbury projects.

Biosecurity Minister Damien O’Connor and Civil Defence Minister Peeni Henare jointly announced the most recent round of funding yesterday at an event in Queenstown.

O’Connor said: “We're ramping up our wilding control activity in areas where jobs are needed most. Budget 2020 included $100 million for wilding pine control. Over $36 million of that funding will be spent in the next 12 months as part of our four-year programme. That extends our work from 19 to 58 sites across New Zealand."

In total, there will be 550 jobs and $36 million throughout New Zealand. 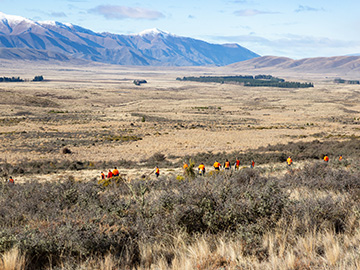 Most of the new round of funding – $17.2 million – will fund projects in Canterbury covering over 400,000 hectares, broken down as follows:

Chair Jenny Hughey said the funds will mean another boost for local employment and the continuing battle against this unwanted pest.

“We have already expanded our control programme in the Mackenzie Basin with considerable Crown funding having been applied to the problem, most recently in May.

"This further funding will help us to accelerate the good work that’s been happening for some time. Farmers and the whole Mackenzie community keep telling us we must get on top of this problem and that all the funding and resource we can apply to it helps," Hughey said.

Graham Sullivan, our biosecurity regional leader, reaffirmed why wilding pines are a priority biosecurity matter: “We welcome this most recent tranche of funding, as it will help to increase the speed and efficiency with which we can rid our beautiful landscapes of this invasive pest.

"The recent fire at Lake Pūkaki highlights just one of the numerous problems associated with wilding pines; the increased risk of fire, the associated loss of biodiversity, and impact on water yield and subsequent reduction to stream flow serves to remind us why we are working so hard to get rid of them,” Sullivan said.

Henare was in the Mackenzie District earlier this week to survey the fire damage near Lake Pūkaki, the spread of which has in part been attributed to wilding pines.

“I saw the devastation first-hand, and heard concerns from locals that the wilding pines are a pest, and play a dangerous part in helping to spread fires.”

O’Connor said New Zealanders could expect to see significant changes to the landscape as control activity increases: “People are inclined to think any tree has some value. But the recent fires near Lake Pukaki, only a few years after the devastating fires in Flock Hill, have shown that wilding pines threaten the ecosystem, the economy – and the community.”

Come along to find out about wildings and what we've got planned, including speakers from Environment Canterbury, the National Wilding Conifer Control Programme and others.

Wilding pine projects in Canterbury are to benefit from $2 million in government funding for the National Wilding Conifer Control...

The five organisations that make up the Mackenzie Basin Agency Alignment Programme, Environment Canterbury, the Department of Conservation, Land Information...

Central government funding has allowed for the creation of extra jobs in new wilding pines removal projects in Canterbury, primarily...