Severe weather warning in effect
Heavy rain and severe gale winds expected for many places this weekend from Saturday evening until late Sunday. We may need to close our parks, please watch for updates as the situation evolves.

An independent report into Environment Canterbury’s 2017 greenhouse gas emissions has shown the tangible ways in which the organisation has reduced its level of emissions, as well as highlighting an appetite for ongoing improvements in 2019 and beyond.

The report was prepared by Madworld Ltd using an ISO certified methodology. The report measured the organisation’s greenhouse gas emissions to produce a net emissions report for the 2017 calendar year. It looked at the ways in which the organisation generates emissions through its core activities supporting air quality, biodiversity, freshwater management and resilience.

The report highlighted a number of significant figures, including:

Bill Bayfield, Chief Executive of Environment Canterbury, said: “I feel strongly that we must tackle the climate change challenge head on, starting by analysing and changing our own organisational behaviours. I am proud to highlight the efforts we have already demonstrated in improving our impact on the environment. Obviously, there is always more to be done, and we have demonstrated our appetite for doing that.”

The full picture of total emissions

Although the scope of the report covered just the main Timaru and Tuam Street offices and fleet, the report noted the material impact of the emissions of other Environment Canterbury vehicles and recommended that the full figure be used in future to more accurately portray the organisation’s environmental footprint.

On that basis, the full figure was derived from the “Transport Fuels” section of the report which shows the total gross emissions for the year were higher than that reflected in the final figure in the report – ie, 914 tonnes in the report as against a more accurate 2,253 tonnes when taking into account the entire fleet. Bayfield commented: “I have no doubt that as an organisation that emits about 2,200 tonnes a year and sequesters 7,700 tonnes, we will only get better at both.”

Beginning of a journey

Since the report’s publication, Environment Canterbury has been continually commissioning the plant at Tuam Street to improve performance and reduce energy consumption, and together with changes in staff behaviour which improved energy usage, Tuam Street has received a 4.5 star NABERSNZ energy rating for 2018 (which is between excellent and market leading performance). In December 2018 the organisation also installed a grid tied, solar system on the roof of its Tuam Street building.

As is clear from the diagram below, transport fuels are by far the largest contributor to Environment Canterbury’s total emissions, and this is where much of its efforts have been focused. It is a foundation member of Yoogo Share (along with around 10 other Christchurch organisations), with five leased electric vehicles (EVs) in in its own fleet. There are also plans to purchase its own EVs in the 2019/20 financial year, with an aim of having 50% of its passenger vehicles being pure electric by 2022.

Bronwyn Simmonds, Asset Services Manager at Environment Canterbury, commented: “I am thrilled that we as an organisation are now well into our journey of reducing our environmental impact in both the property and fleet space, and I would encourage other organisations to do the same.”

The intention is to commission an emissions report on a three-yearly basis. 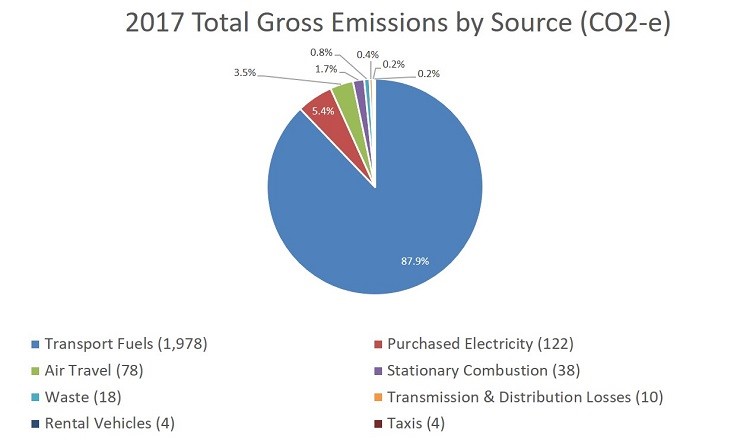 In the latest of a series of initiatives designed to embed climate change considerations into all the decisions made by...

We play our part by taking actions and developing plans.